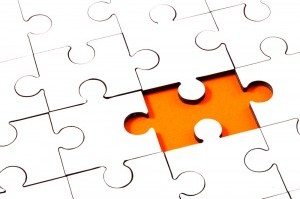 In a world so accustomed to instant gratification, it’s hard to imagine a time before computerized data.  Up-to-the-minute pricing, shipment tracking, and lightning-fast service at the cash register are just some of the modern conveniences that enable our fast paced consumerist culture.  But while we may take our grocery’s express lane for granted today, an automated checkout would have been an unheard-of luxury just fifty years ago, a luxury that now comes standard in even the smallest corner store.

And it’s all thanks to the black and white bar code on the back of the box.

Since its introduction in the late 20th century, the often-overlooked barcode has evolved into a powerful tool across multiple businesses around the world.  Originally designed to improve the speed and efficiency of punch card systems, the barcode is now an indispensable staple of retail, manufacturing, and even healthcare industries.

But developing such a useful technology was not as simple as it seems.

Beginnings of the Barcode

Before the barcode, businesses were forced to take inventory by hand, a long and arduous task that took large amounts of manpower and was subject to constant error.  Since most stores couldn’t afford to repeat this process more than once a month, the only way to manage and re-order stock was through strict record-keeping and lucky guesses.  Punch cards were an early alternative to pen-and-paper inventory, but the necessary equipment was crude, unwieldy, and cost far too much for the country’s economic period.  By 1948, grocery chains were desperate for a solution.  Silver and Woodland, graduate students at Drexel Institute of Technology, were asked to devise a method of automatically retrieving product information at the checkout counter while updating a store’s remaining products.  A system using ultraviolet-sensitive ink was built, but ultimately considered to be too expensive and unreliable.  After several setbacks and prototypes, the students settled on a pattern of concentric circles modeled after the dots and dashes of Morse Code and read by a high wattage light bulb and the tube of a movie sound system.  Though the makeshift scanner was able to read printed information, it was still too dangerous and overcomplicated, expending huge amounts of heat and light and taking up too much space.  It wasn’t until the 1970’s, when lasers were invented, that these scanners were able to transition to the real world.  As David Collins and IBM began implementing the technology into more varied applications and industries, the barcode system became a feasible, cost efficient solution, quickly catching on from store to store.  The first product to ever be scanned using this barcode technology was a pack of Wrigley’s Juicy Fruit gum sold in 1974 in Troy, Ohio, humble beginnings for what would shortly become the new standard for industries everywhere.

As the demand for accessible information continues to grow, modern barcode is designed to serve the needs of diverse businesses, comprised of a number of different types of codes and software.  Despite this, most people are familiar with only the widely-used UPC (Universal Product Code).  Invented by George Laurer in 1973, the UPC standardized the industry, allowing each and every commercial businesses access to the technology without fear of investing in the wrong scanner.  These scanners read modern barcode using a system of lasers at different angles, which interprets the width and spacing of the code’s black parallel lines.  Each space tells the computer where one number ends and the next begins, making it easy for any number to be easily scanned into a piece of data collection software.

The uses for barcoding technology are virtually limitless. Most people recognize the standard barcode on the back of groceries and commercial products found in grocery stores, but almost every industry in the world uses some kind of software solution that utilizes barcoding technology. The barcode can be utilized not only for data collection, but also to help generate and report various statistics—usually in regard to some kind of inventory.

Barcoding technology has seen a steady rise in adoption throughout the healthcare industry, stemming from the 1970s.  As the medical world relies on accurate reporting and data collection in order to interpret, analyze, and manage risk, hospitals and research facilities have since increased their reliance on powerful barcode-related software solutions to help keep patients safe and keep processes running smoothly with minimal manual intervention.

Barcoding technology has been used as a method of keeping and tracking inventory of drugs and medications, which helps prevent any missing materials and more accurately project amounts and varieties of medications present at any given time. With an even greater importance, barcoding technology has been used for data collection and tracking of bodily specimens, such as blood, urine, or breast milk.  Since these fluids can become unsafe or deadly if mishandled, mislabeled, or improperly tracked, the barcode system can help manage this effectively and keep patients safe.

Software Solutions for the Future

Currently, healthcare businesses and other industries are exploring the possible use of barcoding technology to develop identification systems and even more advanced practical uses.  Barcoding technology continues to evolve as new software solutions come forth and the need for data collection and management continues to grow.  Rival systems, such as Radio Frequency Identification (RFID) technologies, are beginning to emerge, but the barcode remains cheaper, more practical, and more capable of managing enormous amounts of data.  It is clear that bar code technology is still just as relevant today as it was fifty years ago.